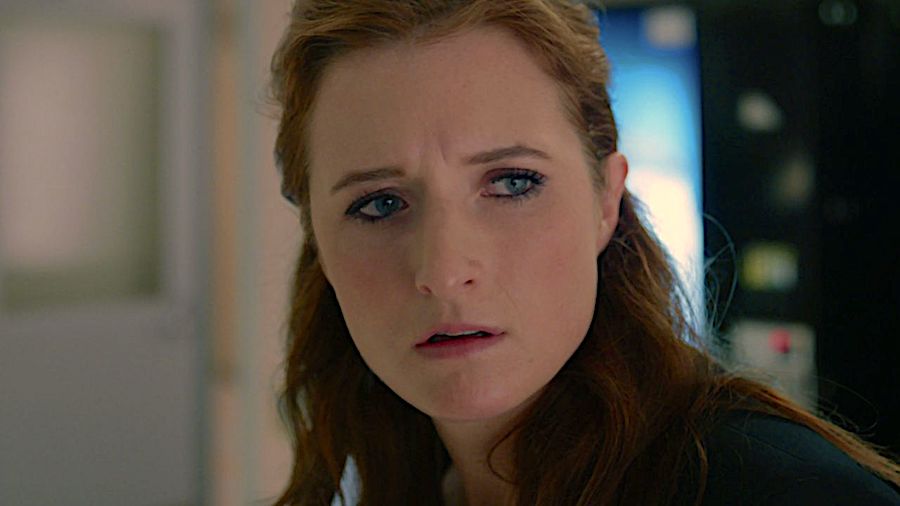 And… breathe! Just like we mentioned last week, Mr Robot will have to crank up the tension as we head into the last two episodes of the second season and hell, did S02E10 deliver on that promise! With balls!

The episode began with The Last Honest Man, Terry Colby in the expositionary-position with Phillip Price and his God Complex. The Evil Corp CEO trades countries like kids trade baseball cards – which country is annexed to China is unimportant but it demonstrates his power and megalomania.

Remember last week when I talked about how good television should turn you into a detective hunting clues? Well, this episode goes the whole hog and for our first pig, sorry… pork-based, sorry again… police work assignment, we’re asked who the two people that are more important than Price could be… 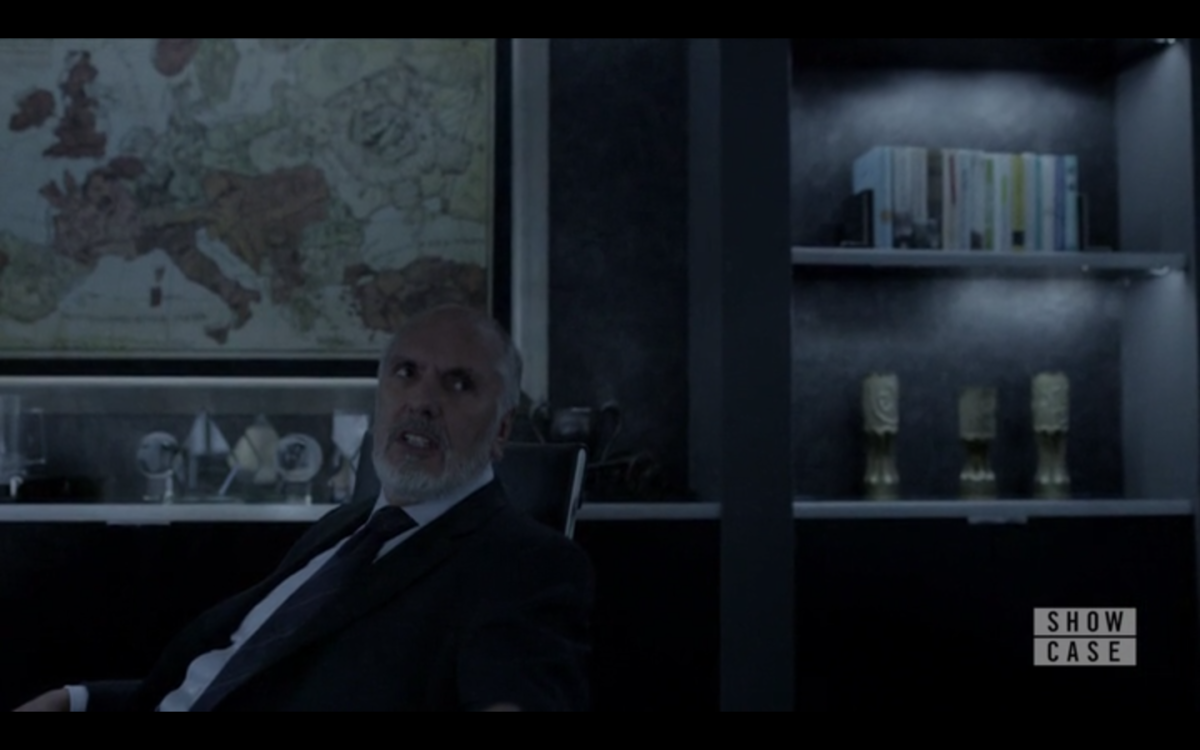 “Cocksucker” Narcissist Donald Trump will sue USA Network and probably us for the quote!

The serenity of Price’s office is rudely interrupted by Japanese all-girl thrashcore, we cut to Joanna’s walk-in wardrobe before her exchange with Elliot. Further to our own mounting evidence, S02E10 served even more clues (or red herrings) that Elliott is Tyrell Wellick…

“Blood simple” or no, you can get pills for that, Mr Robot

Did you notice the way Joanna seems to laugh when she calls Elliot “Ollie”? Like she’s already in on the joke. Second, he feels like she is “inside his head”, with even Robot saying he feels like the Danish femme fatale can see him. Why would she task Elliot with finding Tyrell unless she knew something big and was withholding evidence from us?

After her go-and-fuck-that-redhead-and-bring-me-her-earrings first date story coupled with her “Do you really want to say no to me?”, it seems Tyrell and Elliot share something else in common – they will both do anything for Joanna. And then this happens! 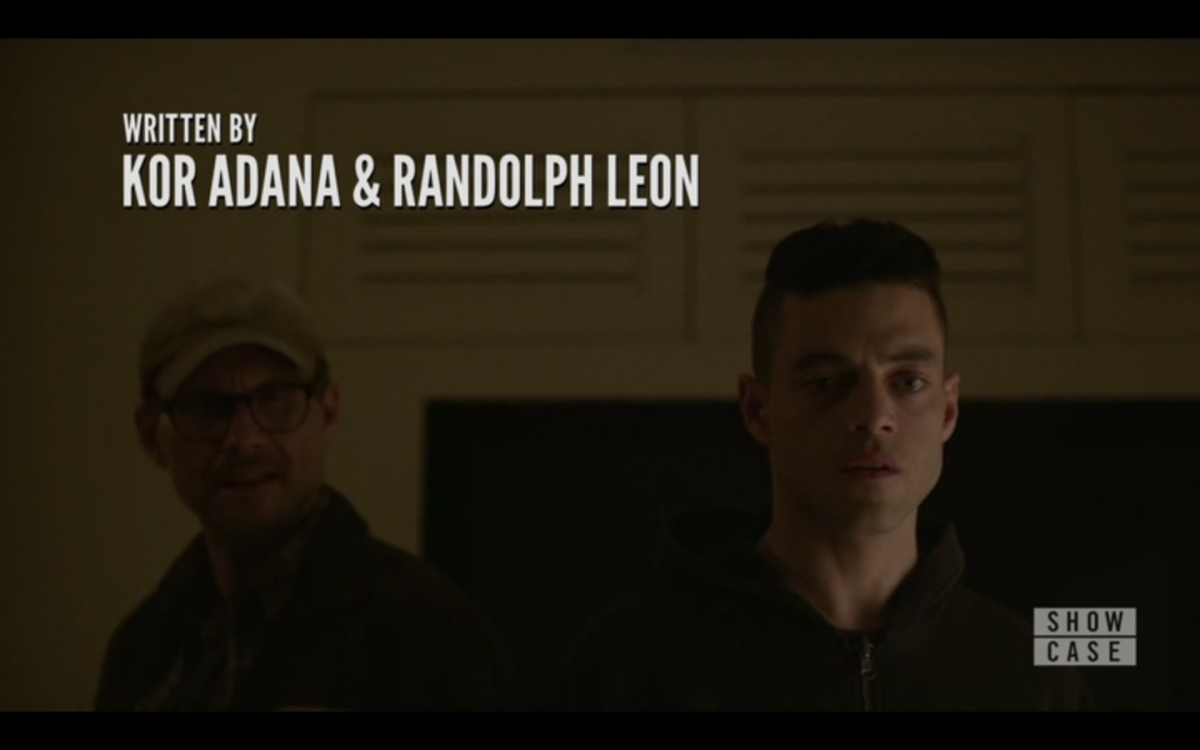 We cut to Darlene and Cisco’s storyline (last week’s door knock cliffhanger will have to wait to be answered) where he has somehow, miraculously transported Washington D.C. F_Society member, Vincent (complete with prosthetic leg) across town to his apartment.

And just in time as Dom and the Feds are minutes behind him at Susan Jacob’s house. Darlene conquers Darklene and she and Cisco take Vincent to the E.R. where they inexplicably, yet conveniently wait while she opens up about her childhood abduction.

A quiet moment as we cruise past the desolation caused by 5/9; stacks of trash bags line the streets and stacks of people line ATM lines. All gorgeously shot from Elliot’s POV on the way to Micro Center, where he receives a breathy call, possibly from Tyrell. 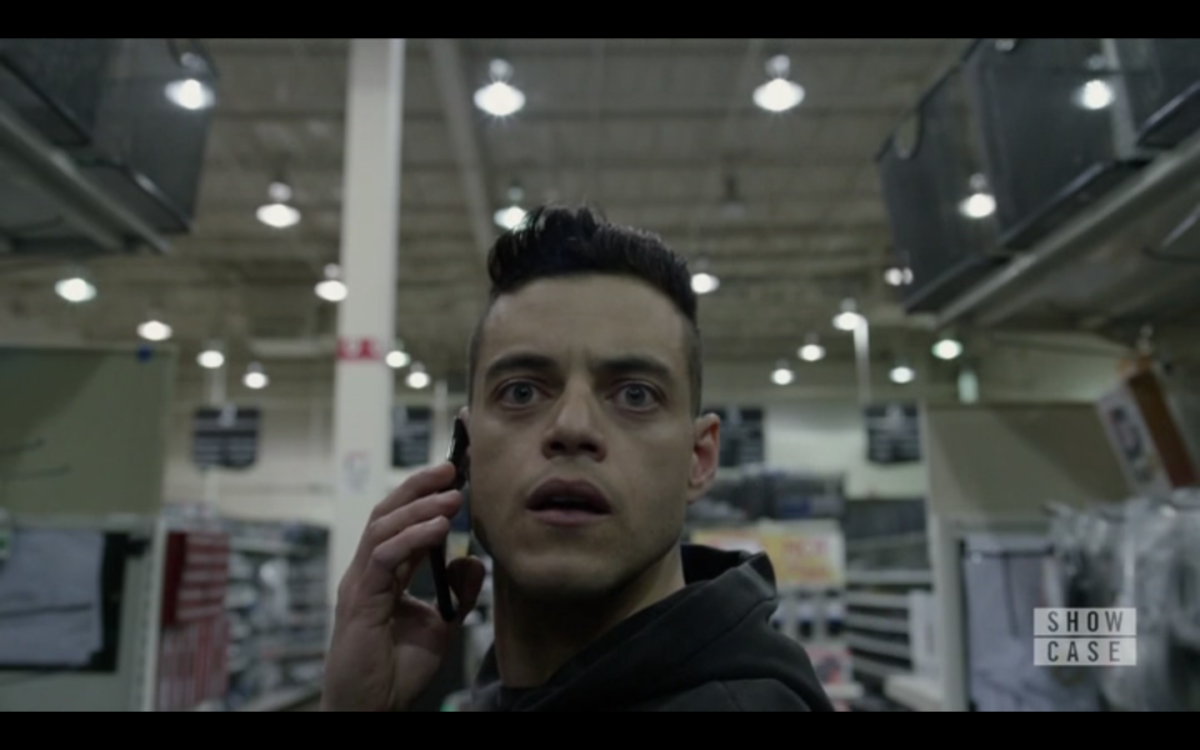 This is the most well-lit room Elliot has been in since he climbed outta Mrs Alderson!

Elliot’s voiceover “And why is Mr Robot suddenly gone?” after the phone call was either the best or worst line of S02E10. If it turns out that Tyrell is another alter-alter-ego, then that line is a terrible, piece of on-the-nose internal monologue. If, however, he’s not then it could turn out to be a great red herring.

Equally, if Elliot is Tyrell, it could be the moment this show straps on those jet skis and jumps the shark.

Then, in one of my favorite hacks so far, Elliot MacGuyver’s the shit outta a tube of Pringles to make a cantenna. If you’re a computer aficionado, you’ll already know that hacking isn’t all about Source Code. It’s a way of living, thinking, breathing… being! We’re problem solvers; Private Dicks who apply this methodology to every situation that life throws at us.

Being the world’s first civilian to use a fax machine since the 1993 Washington Township Chemical Leak, Elliot finds the source of Joanna’s phone calls – 92 East 82nd Street; hugely gentrified part of Upper East Side.

Detective Academy Question Number 2: Who would live in such a swanky pad and why would Joanna’s henchman be so sure Tyrell wouldn’t go there? Our hunch is that Scott Knowles has been calling Joanna from his home and sending gifts to fuck with her head after Tyrell killed his wife.

Speaking of Mr Sutherland, when Elliot tunes out the henchman’s voice to talk directly to us, our hacker friend evolves the show to a higher level. 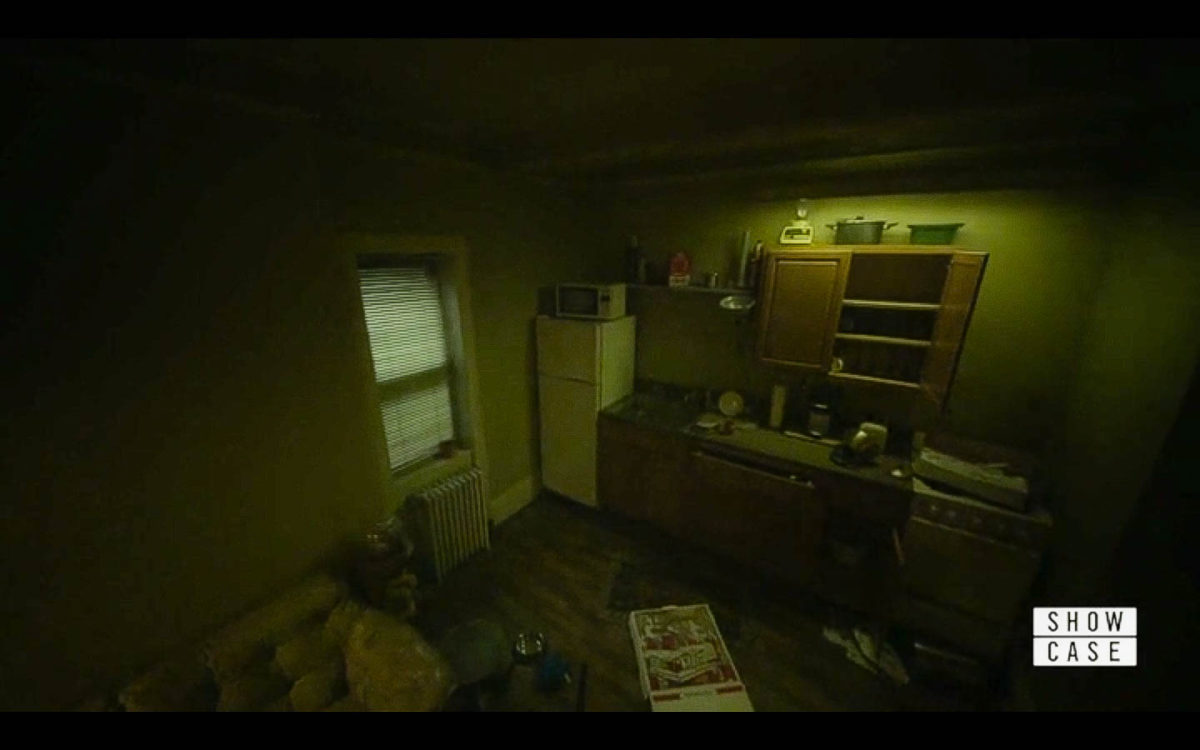 Can you help? Can you look? Do you see anything? We Got Game!

Minutes after Elliot becomes Detective Richard Hannigan on the phone, for the first time, Mr Robot stopped being a TV Show and became an interactive game. The first TV drama to full-on gamify itself. The camera flies around the room like virtual reality FPV while the protagonist interacts directly with YOU, asking you to become an active participant in the show, searching for clues. How fucking cool is that?

How do we interact with Elliot and let him know when we can help him? I’m gonna go ahead and assume it’s through the paranoia-inducing Mr Robot:1.51exfiltrati0n.ipa text game for Android and iOS – in which case you’ll be needing this clue – watch again and pay particular attention to the bottom right of the screen! Gosh, we’re good to you!

By the time Cisco is stealing Darlene’s fries, Dom and the FBI have stormed his apartment to discover his real name is Frances Shaw (perhaps a nod to Frankie Shaw, who played Shayla) and made it to the hospital where they left Vincent. 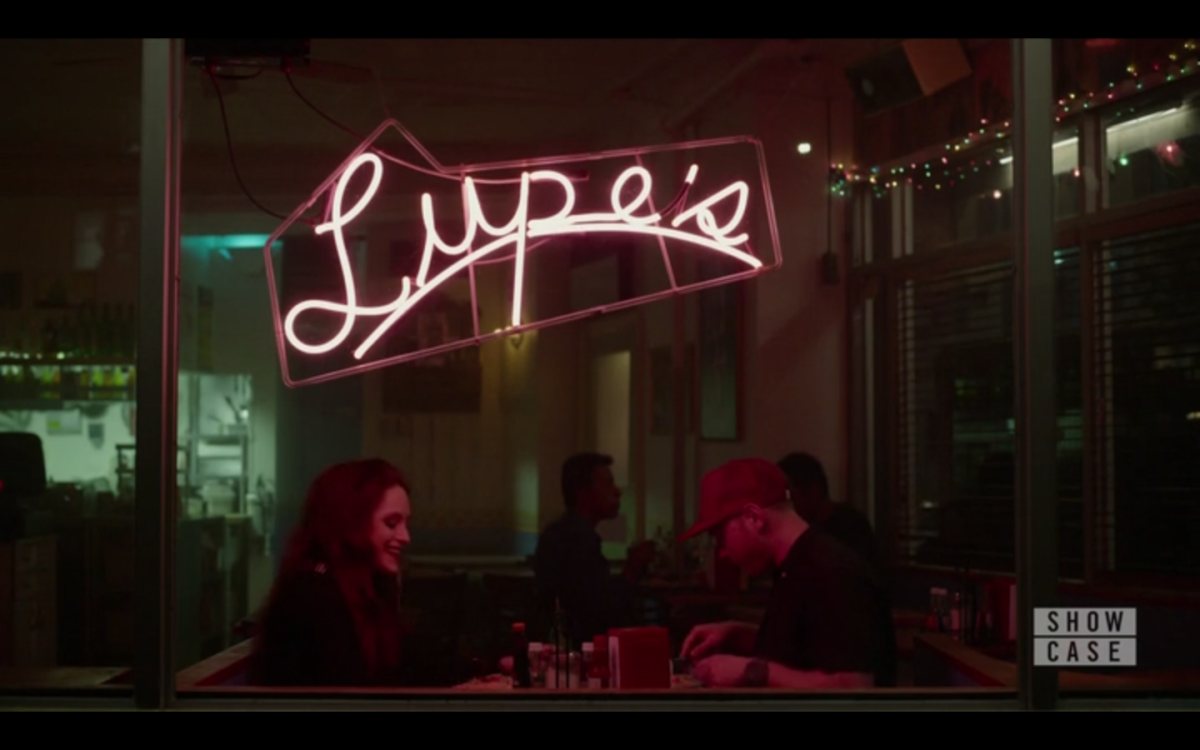 It’s from this moment that S02E10 really began expertly building tension. I say this every other week, but Mac Quayle’s music gets better and better; this week an absolute treat with a John Carpenter-inspired even-more-1980’s-than-usual score which dripped with tension and at one point, actually made me forget how to breathe!

Meanwhile, back in the hospital, Agent Dom DiPierro set about that Good Old-Fashioned Detective Work I opened with. If Mr Robot did this police procedural every week, then the haters of this episode’s paint by numbers logic might have a point, but they miss the point.

This is what Film and TV were made for; we the audience are a step ahead. Knowing what’s coming we can lay in wait on a stake-out dunkin’ donuts into our coffee. Dom was right, her boss Santiago was wrong – if the Feds put out a BOLO, The Dark Army would find and kill The Cisco Kid. Unless she gets there first… 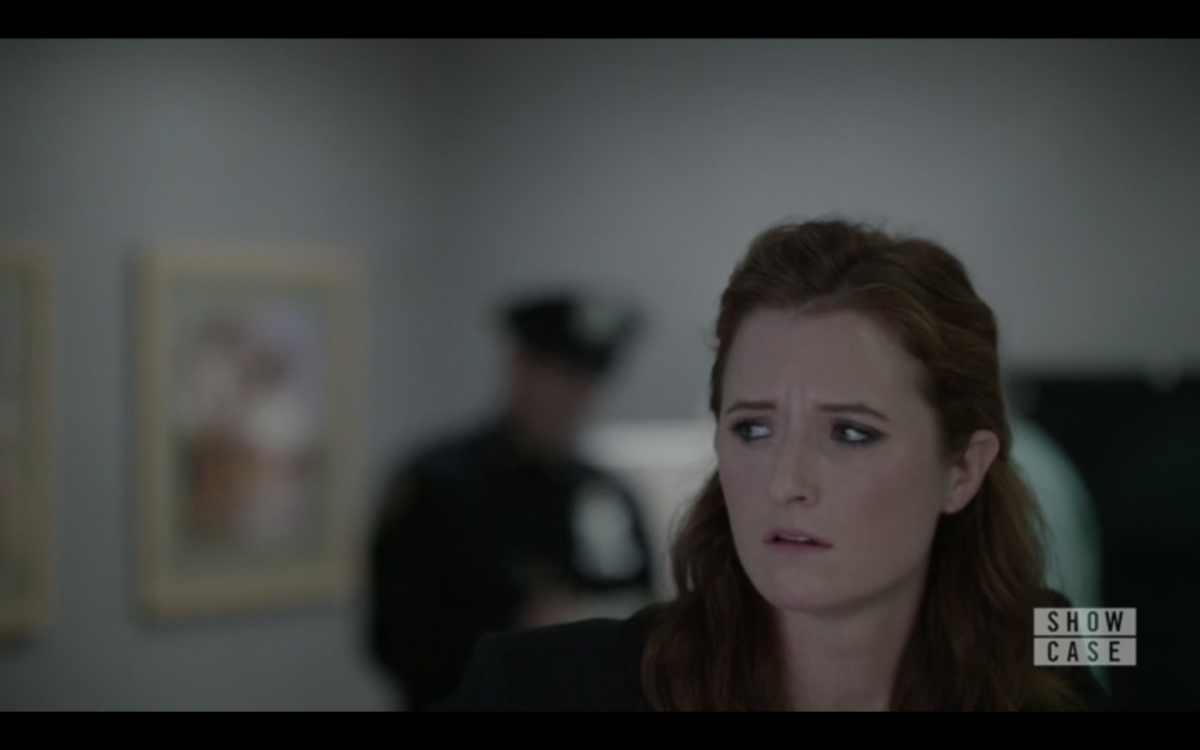 Look, there’s even a cop doing detective work so you get the message #SubliminalTVSecrets

Slight rest-bite (respite) from the tension came with Angela meeting Elliot on the subway train but even this became more and more intense as I swear she was wearing a wire!

The Kiss We’ve Been Willing To Happen seemed not only as if she wanted out of the whole game but also a final goodbye. Their first and last kiss. To me, it kinda felt like actress Portia Doubleday might be heading for L.A.’s sunnier climes.

Detective Academy Question Number 3: Were the two figures who confronted her on the train FBI, Dark Army or Evil Corp? Could Angela Moss have been 187’d?

We’ve done our detective work, now with her evidence gathered, and conclusions drawn, Dom runs across the city against the ticking clock of the setting sun, (#MoreSubliminalTVSecrets) frantically searching for Frances… not only does she want justice, she needs to save his life. 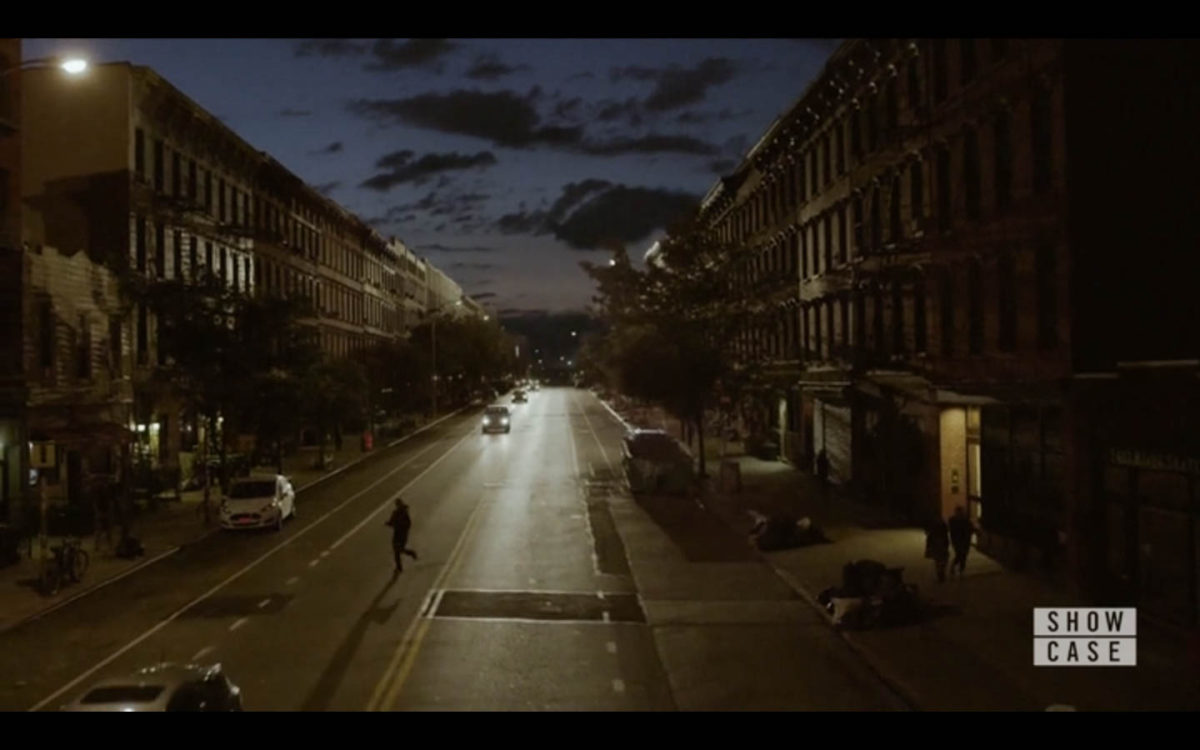 Note to self – Stop giving readers screenwriting tips or they’ll get to Hollywood before me!

And if you weren’t 100% sure already, the second we heard that motorbike (before we even saw it) we all knew exactly what was going down. The Dark Army hitman crossed the street and sprayed machine gun fire directly at Darlene, Cisco and Dom.

Meaning it’s time for the Last Detective Question of S02E10. When she ran out of the diner, we saw that Dom’s face was covered in blood, but who’s blood? It obviously wasn’t her own as she was moving fine, meaning either (or both) Darlene & Cisco are lying injured or dead.

Along with Angela, that means three main characters could have met their ends. Yes, it’s more likely that only Cisco dies, but let’s not scupper the raw emotion served up by questioning too far ahead. It’s just a ride. So sit back and enjoy the fuck outta TV’s best series. 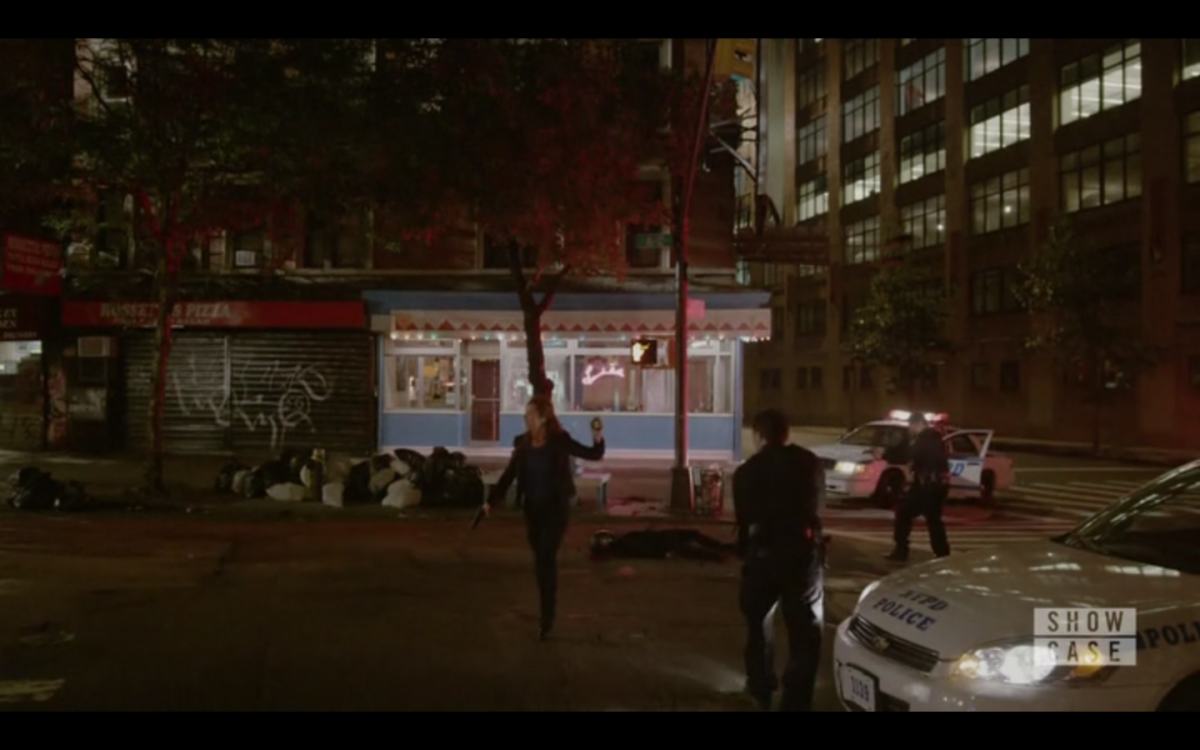 With just two episodes to go, S02E10 not only cranked the tension up to 11 and served up the biggest cliffhanger yet, it also got us, the audience mirroring the characters by involving us in Good New, Tech-Based Detective Work and you just witnessed the birth of a new kind of TV.

It just had everything you could want from a TV show. Yes, we’re a tiny bit biased cos our buddy, Kor Adana (along with Randy Leon) wrote the episode, but that’s not the only reason we believe S02E10 is the best episode yet…

To find out why, click here. Until next week… Peace.