YOU ARE THE HERO…

AND ALWAYS HAVE BEEN 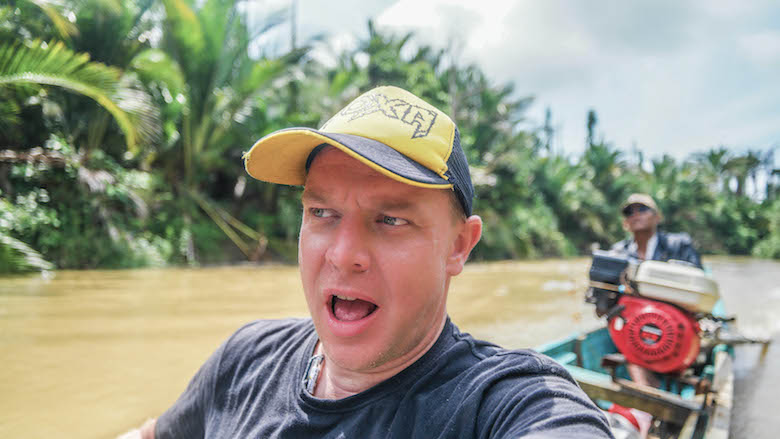 YOU ARE THE HERO AND ALWAYS HAVE BEEN

Sports-jocks and non-geeks may not remember Choose Your Own Adventure books, but aged about 10, I was obsessed. Whether I was evading The Warlock of Firetop Mountain’s sorcery, fist-fighting local troublemaker Jake from Glastonbury Market or interrupting occultist sacrifices to hooded, goat-horned wraiths inside the House of Hell.

Whatever messed-up situation this ten-year-old boy found himself in, nothing was as panic-inducing as the fear of turning to page 114 to read the words “You are dead,” which still haunts me to this day.

Today’s ultra-violent computer games have expanded this first-person heroism a thousand-fold and the innocence of 1970’s Tolkien-inspired hippie-fest that was Dungeons and Dragons has long since been forgotten. Nevertheless, Fantasy was, for a long time, the home to first-person heroism, but Steve Jackson and Ian Livingstone’s Fighting Fantasy books were not as revolutionary as they were perhaps thought.

Granted, they gave us a literary fork in the road, asking:

To attack the Warlock of Firetop Mountain’s Godzilla-sized dragon with a rusty grapefruit zester you pick-pocketed from Troubled Jake turn to page 123.

In stark contrast with their “Thrilling fantasy adventure in which YOU are the hero!” capitalised, emboldened and underlined tagline, they were not the first to make the reader the hero.

Not by several thousand years. 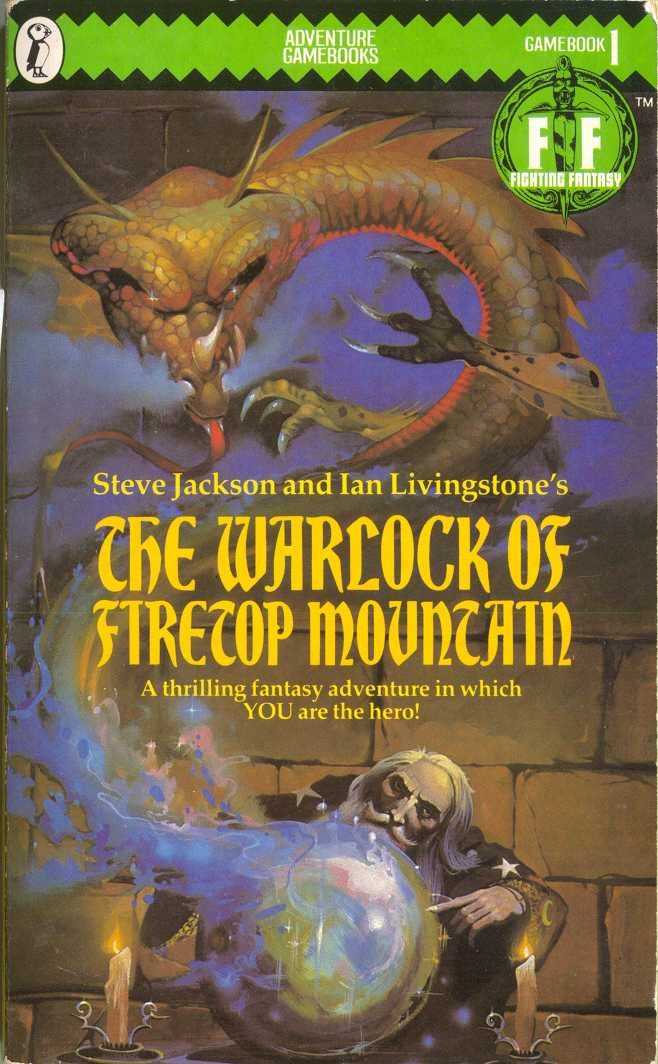 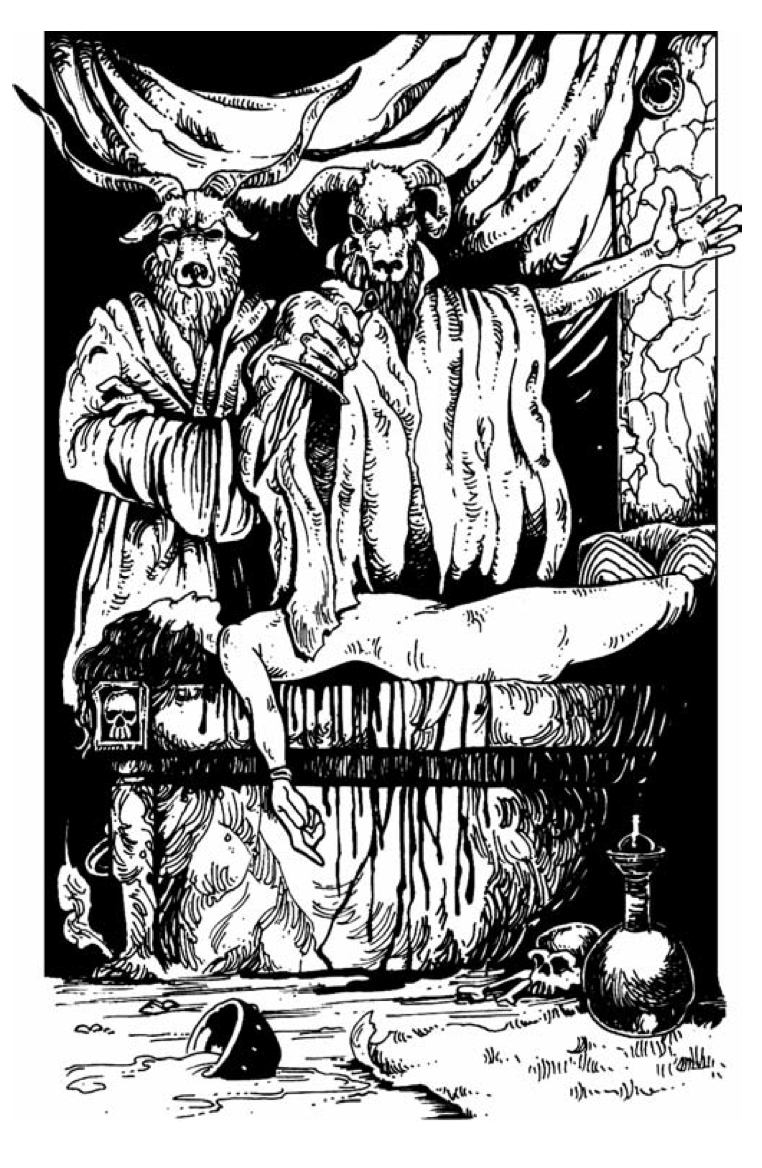 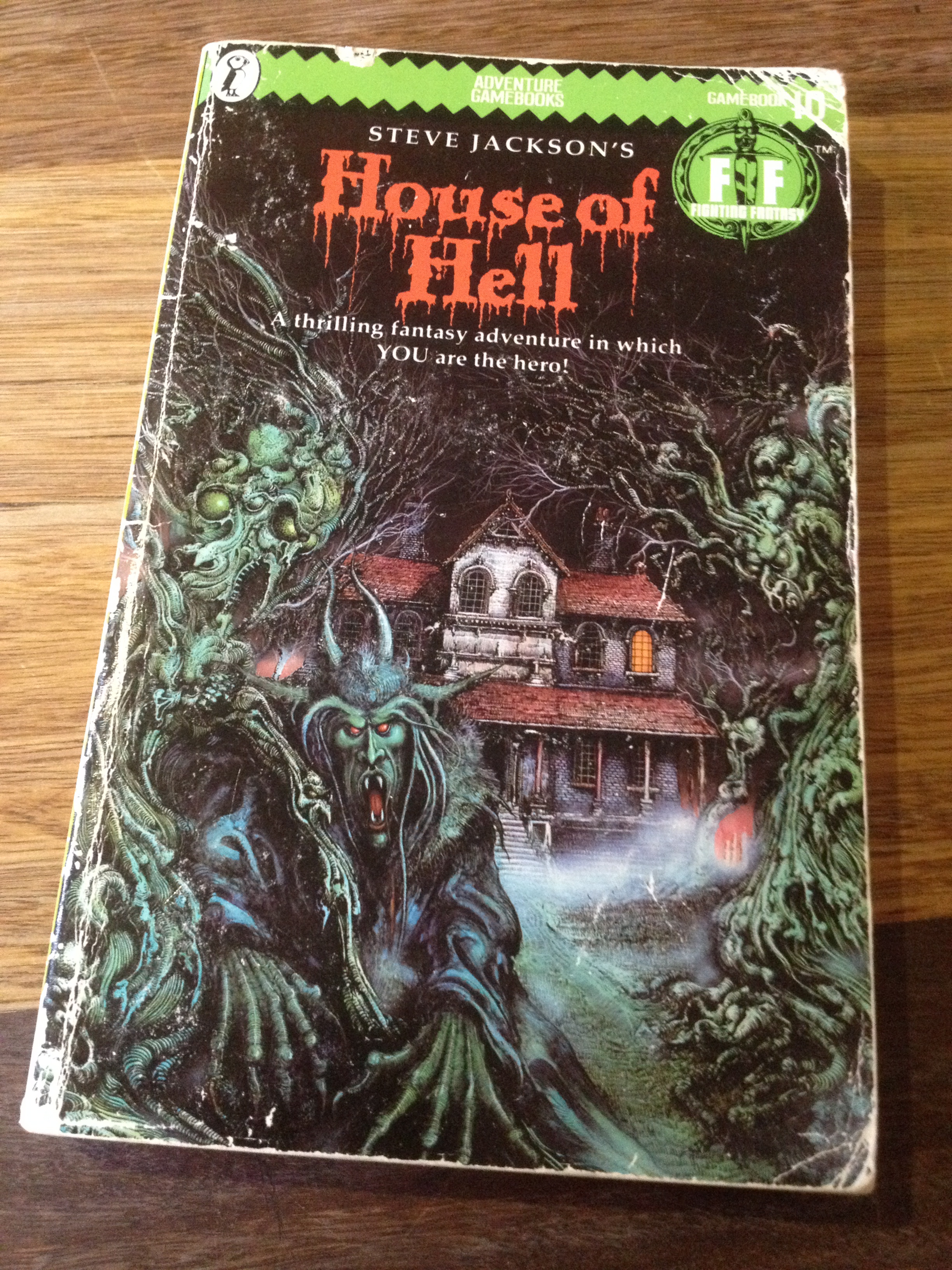 YOU ARE THE HERO OF YOUR OWN STORY

Today, I’m in The Mentawai Islands, approximately 150km off the west coast of Sumatra. I am in a canoe. The canoe has a motor and we are being driven five hours down river to see to a tribe. I am sitting in two inches of brown river water.

Yesterday, I was on another island, because my acquaintance, a nineteen-year-old Indonesian photography student, Fauzy who serendipitously popped up on Facebook asking if I wanted to go and visit The Mentawai Tribe somehow took us to the wrong fucking island. Despite being from Padang, the actual city from which the ferry leaves to these islands, he managed to put the both of us on the wrong boat meaning we were 100km off course. Jesus Jones! I mean, how is that even possible?

After an hour or two of faffing and failed phone calls, during which time I realised I had clearly found the Lenny to my George, we managed to find a fisherman who would take us to the correct island for the princely sum of one million, five hundred thousand Indonesian Rupiah (U$106). Since he was heading there to go home anyway, I managed to bargain him down by a whole ten pounds to one million three. But not even this unexpected pay-out, a drenching in a lightning storm nor the two and a half hour ride at break-neck speed in the fastest fishing boat ever to grace the Indian Ocean could dampen my spirits…

I was on my way to see my first tribe to stay with a bona fide shaman!

Back on the canoe… We boarded at nine this morning after my camera and every vital gadget, cable and piece of electronica was double-waterproofed in blue plastic bin-bags. I have noodles and biscuits and water as we’re not sure what food, if any, awaits us in the jungle… and so Fauzy, his friend, an egomaniacal wannabe Indonesian army-member/guide that I didn’t want, need or ask for (though more of a girl guide) called Bobby, and I set off…

As our canoe disappears from the harbour, the river turns from sea-green to chocolate milk brown and dense mangroves begin to line the side of the swampy river. Overhanging palm trees form a tunnel, and when we emerge back into the sunlight, the river widens, opening up and offering herself to us. A family passes on another boat laden with fruit from the jungle, its V-shaped wake rocking our motor-canoe from side to side – Splashed with water, I am fourteen year old Charlie Fox and this is my Mosquito Coast.

As we venture deeper into the unknown, a mauve flower is the first dash of colour that isn’t brown, green or yellow in an hour. The mocha water resembles The Amazon – mother of all rivers and I turn from River Phoenix to Ice Cube, fists clenched ready to fight Anaconda in the muddied waters of deepest, darkest South America.

Today was a good day. 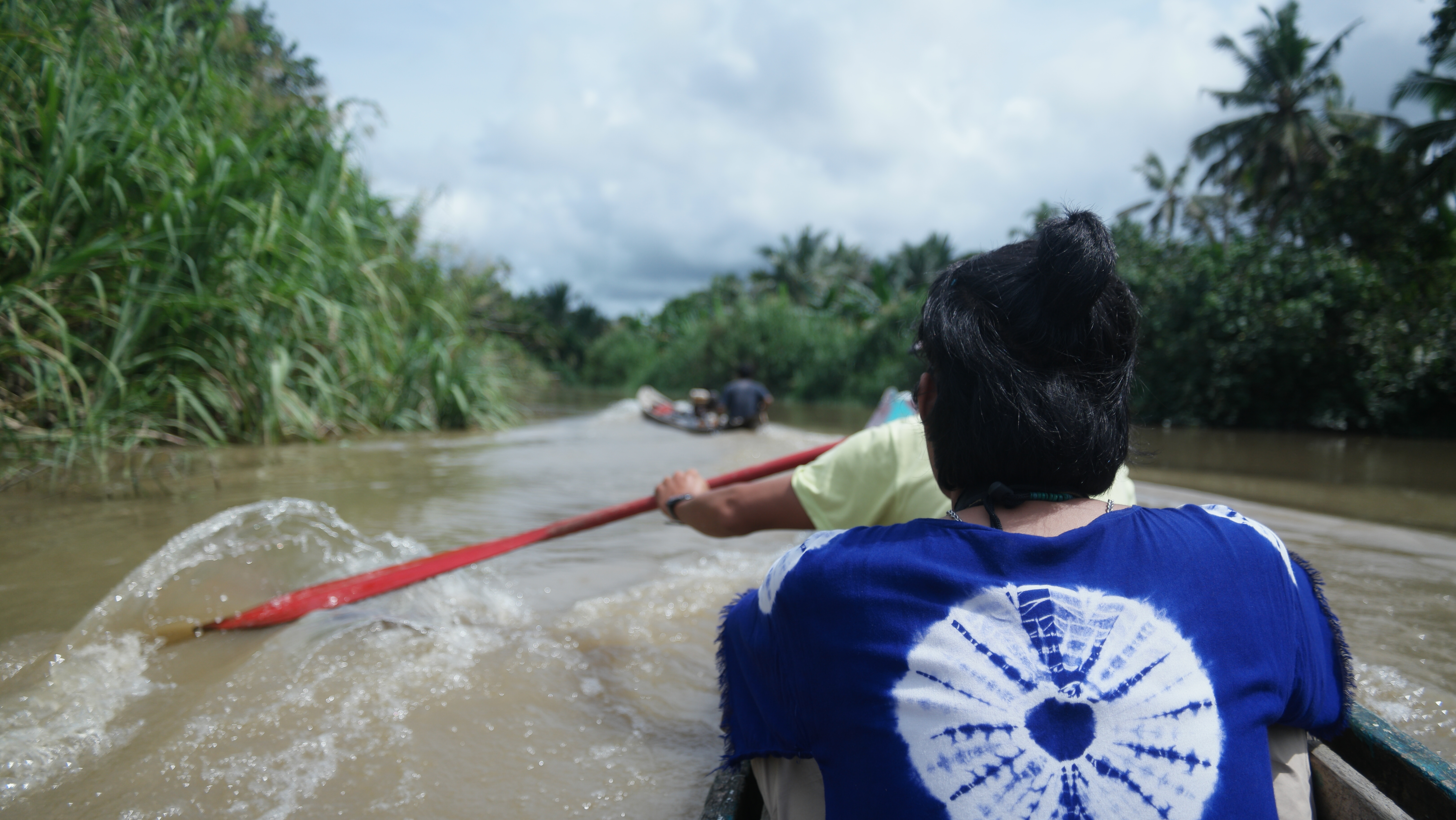 Our driver swivels and pivots as the river bends and weaves to navigate switchbacks, floating logs and flotsam. He’s doing a good job. When Girl Guide Bobby is not asleep or too busy smoking, being one of those men who think they were in the army, he uses an oar to help us around tighter bends. It lends no help whatsoever to navigation but it goes some way inflating his misguided sense of machismo. While he tries too hard to be a man, I am blissfully transported back to childhood as the avenues of palms, replaced by three-metre bullrushes and pampas grass invoke Arthur Ransome’s novel Swallows and Amazons.

One minute it’s 1930, I’m nine years old and a proud, pirate treasure-chasing member of the exclusive Coot Club. The next, as clouds blot out the sun it’s 1933 and I’m Fay Wray, on the waters of Skull Island on my way to meet King Kong.

Two hours in and Cadbury’s Dairy Milk-coloured butterflies evolved to be the same colour as the water flit passed in the breeze. Another hour – Midday; the sun obliterates another layer of my skin and I wish I was Achilles and our pom-pom driver was Charon, Ferryman of the River Styx delivering our souls to Hades – at least the pennies on my eyes would protect my eyeballs from sunburn. Even taking on as much water as possible, I’ve so little moisture in my body that chewing on my inferior Rich Tea biscuits becomes more like eating a Champagne glass.

Oh well, there’s no going back; I’ve crossed the Rubicon.

After stopping to refuel from an oversized petrol can, our overpriced canoe driver brings the motor to an idle and ponders as we reach a fork in the river. Had he forgotten which way to the tribe? To take the LEFT tributary turn to page 51… 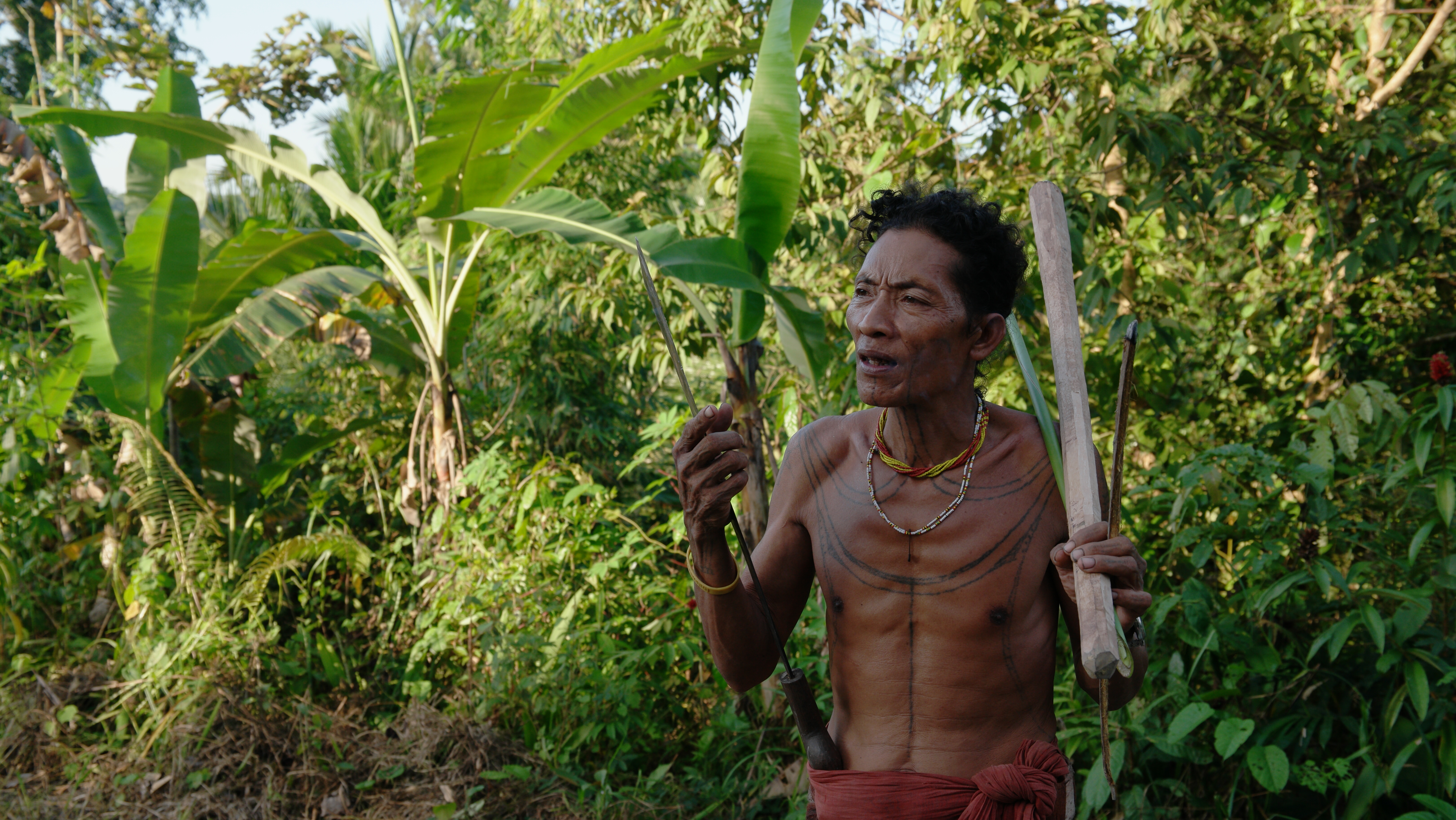 One o’clock. It’s hotter than page 72 of a Michael Crichton book. My teeth are sunburnt and every corner we round, the water muddies, the sun intensifies and I’m reminded of my time on the deltas of the Mekong River, ten years ago. I feel a Vietnam flashback coming on… I am Apocalypse Now’s Captain Willard and I’m certain the sun would even burn the gaps between fourteen-year-old co-star, Laurence Fishburne’s teeth.

As I search for words to describe deep crimson, almost black, butterflies, Sir David Attenborough’s voice comes out instead of my own and I realise that I am finally on the journey I always wanted; natural historian, foreign correspondent, colonial explorer in a baseball cap. I am doing exactly what I always wanted. I am the hero of my own life.

The river? Well, that’s still mud brown; not red enough to be The Amazon nor the Mekong – but maybe The Congo. And with thoughts of Africa, I become Marlow on his search for Kurtz in Joseph Conrad’s Heart of Darkness.

After more than five hours, we arrive at the jetty, by which time I contain as much water as a baked clay pot and it occurs to me that we never see Indiana Jones travelling to these places. There’s no montage of a red marker pen highlighting my route on a map. To truly be a hero like Indy, I must also live through his deleted scenes.

We climb the grey mud banks of the jetty, collect our bags and prepare for an “hour’s hike” through the jungle to get to the tribe. I know an Indonesian hour and a real hour are two entirely different things but that’s a whole other story.

During my five hours in the canoe, I was carried not only down a magnificent river, but through a swathe of other settings and characters, real and imagined, from the books, films and TV shows I’ve enjoyed throughout my life. Today I was the hero.

My point is, while Steve Jackson and Ian Livingstone’s Choose Your Own Adventure books were visionary, they were not revolutionary.

You see… YOU are the hero of every book you’ve ever read, every film and television show you ever watched.

Ask ten people why they like movies and nine of them will say for the “escapism” – Those nine people miss the point. We don’t read books to escape; we shouldn’t be switching off while watching movies (even during Michael Bay movies) we should be sitting up, wide awake, listening to their message, following their lead and taking action.

You see, stories are cautionary tales about YOU – every single one of them.

We have just forgotten but I am here to remind you that: 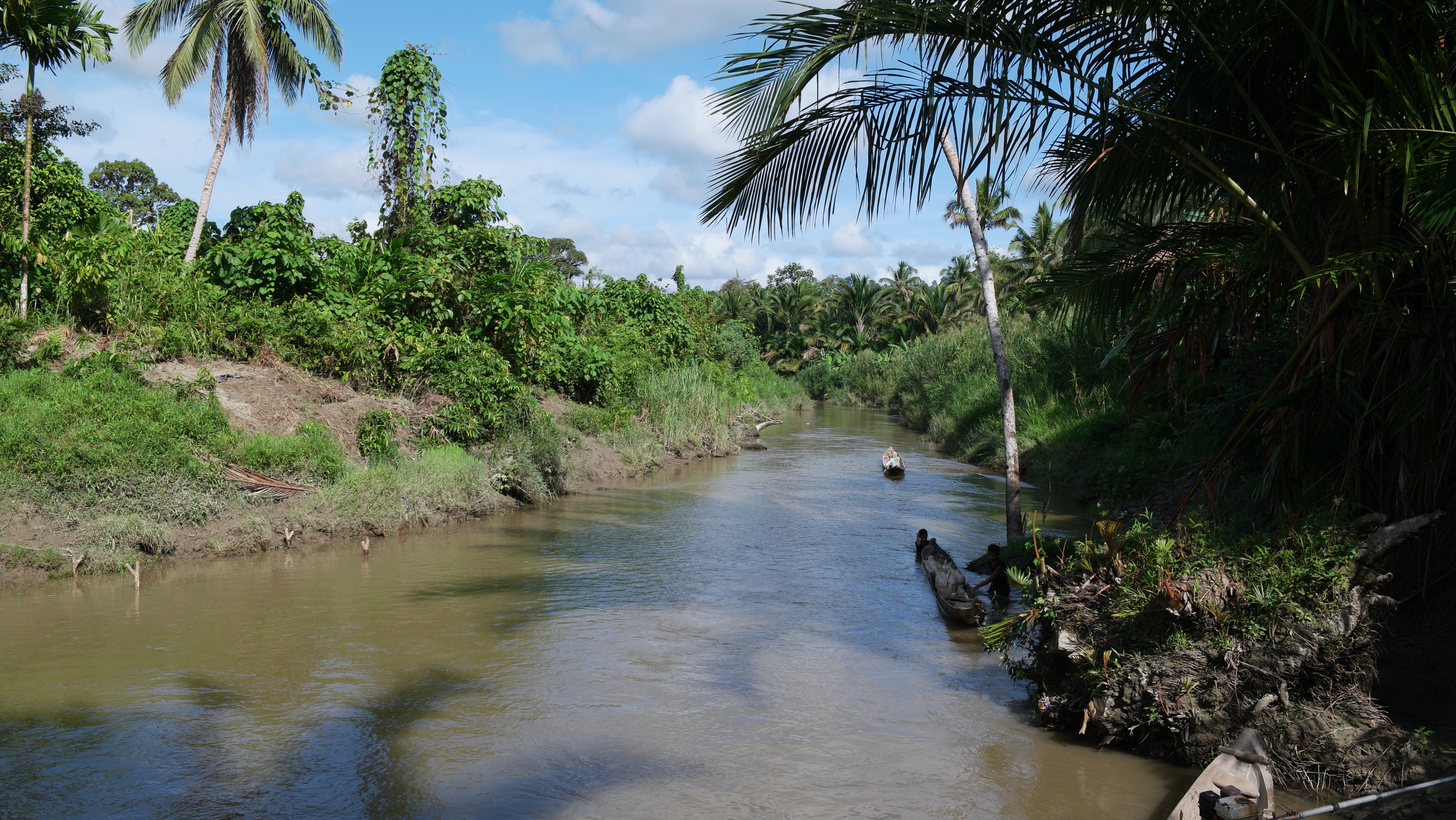 YOU ARE THE HERO. YOU ALWAYS HAVE BEEN

When we see a SLIPPERY WHEN WET sign, we instantly recognise that the cartoon figure is us potentially falling over. 30,000 years ago, the first caveman to draw spear-carrying stick figures next to buffalo on rockfaces (to pictoralise an abundance of food in the area) wasn’t drawing himself… he was drawing the next nomadic tribe. He was drawing YOU!

The communication of essential knowledge is the reason we drew on cave walls, passed down stories for thousands of years and read about heroes and heroines for hundreds. That’s why we’ve gone to the theatre since The Greeks. It should also be the reason we watch Marvel Superhero movies today. They are not for children. Superheroes are our modern myths.

So let me ask you… who is the hero of Homer’s Iliad? Shakespeare’s Hamlet? Heart of Darkness? To Kill A Mockingbird? Star Wars? The Lion King? Sex and the City? Lost? 24?

It was always you.

You are the hero Achilles. You are Prince Hamlet of Denmark. Marlow is you. You’re Scout Finch and Luke Skywalker. You’re Simba. Carrie Bradshaw. Jack Shephard. Jack Bauer – they’re all you.

If you’re reading this from your office, YOU are Neo from The Matrix. YOU are Walter Mitty. Elliot from Mr Robot is YOU.

If you’re teaching, YOU are Mr Holland beginning his opus. YOU are Dead Poets’ Society John Keating inspiring children to love poetry. YOUR school is School of Rock

If you were raised on a farm, YOU are Dorothy Gale. YOU hired The Seven Samurai. YOU are Superman…  only YOU can save the world.

But if a Kansas farmhouse has just fallen on you, YOU are The Wicked Witch of the East.

Ding Dong. You are dead.